The buildings of Hunters Hill reflect architectural styles covering a period of over one hundred and sixty years, with the Victorian stone houses remaining the dominant feature.

Early vernacular dwellings can be seen in Batemans Road and Mars Street, where the nucleus of a present house may be an 1830s farm hut. Later workmen’s cottages, including those by the stonemasons for themselves, were built as simple sandstone cottages from the 1840s well into the 1880s. Houses were symmetrical, with the door in the centre matching windows or French doors on either side, hipped roof with twin chimneys, verandah scaled to protect in summer but admit the lower winter sun. Rows of such houses now dressed in Victorian lace may still be seen in Alexandra and Madeline Streets.

Some larger houses, such as Loombah in Stanley Road, still retained a plain dignity influenced by the Georgian style. Hunters Hill was known for the French flavour of its architecture, influenced by the French settlers; Coorabel and Annabel Lea with their high dormer windows, Oatlands, Paraza, The Priory, Merilbah and Passy. By 1870 the many buildings by Frenchmen had set a taste and a type.

An increasing interest in decoration characterised the Victorian houses built in Hunters Hill. Examples of the Gothic Revival style are the Congregational Church and the Hunters Hill Primary School facing each other in Alexandra Street with their steeply pitched roofs and long narrow windows with pointed arches. Bargeboards drew their inspiration from the curving and twining borders of Gothic art, and were used by the Victorians to outline gables; an elaborate example is Huntley’s Point House, others are Wandella and 1 Ambrose Street. From carved wood the Victorians turned to cast iron, which was being mass-produced in Sydney by the 1870s. Houses were festooned then and later with cast iron lace; it was used to decorate eaves, as balustrades for verandahs, even to adorn roofs, in the cresting as seen on Wybalena in Jeanneret Avenue and on the delicately pinnacled turret of St Claire and Waiwera.  Stained glass was being manufactured in Sydney from the 1870s, and by the 1890s it was being used in houses in Hunters Hill, principally around front doors. Australian birds were a favourite motif, and sometimes the name of the house was worked in leadlights or etched above the door.

The Classical Revival style is evident in the stone portion of Hunters Hill Town Hall, as it is in many public buildings of the 19th century. The Victorian Italianate style is characterised by rendered brick walls with classical mouldings around windows and doors, ornamental brackets under eaves, panelled and moulded chimney stacks, mosaic tile or marble porches, sometimes a square tower; Burnham is a good example, and Araluen displays some features.

Towards the end of the Victorian period, a desire for more picturesque effects led to use of rusticated sandstone and a projecting bay on one side of the front; the later houses by C.E. Jeanneret are a good example of the change when contrasted with his earlier ones.

The 1893 depression hit the building industry, and with the altered economy altered tastes and materials became evident; red brick replaced sandstone, terracotta Marseilles tiles replaced slate, carved wood in new patterns replaced cast iron lace. Diverse influences (Queen Anne, Art Nouveau, Arts & Crafts, Edwardian) combined with an impulse to produce something genuinely suited to Australia. 52 Woolwich Road makes use of shingles and a rugged sandstone base; 7 Campbell Street has an octagonal turret; 4 Prince Edward Parade reflects the Queen Anne style with its terracotta frilled ridges on the roof; 18 Woolwich Road has Art Nouveau patterning in the balustrade. Houses by the Hunters Hill architect Henry Budden show a predilection for angular geometric shapes and his imaginative use of site, as the houses were designed to take advantage of river views and the movement of the sun around the house. Mornington, 16 Vernon Street, is his masterpiece. By the 1920s, the preferred form was the wide-gabled California Bungalow. Constructed of ‘liver’ brick, frequently on a sandstone base, and with terracotta roof tiles, the California Bungalow has distinguishing details such as diamond-paned leadlight windows, shingles and roughcast render. Examples are 20 Woolwich Road, 10 Jeanneret Avenue, 31, 38, 53 and 55 Blaxland Street; more may be seen along Park Road, Pittwater Road, Hillcrest Avenue and Sunnyside Street. 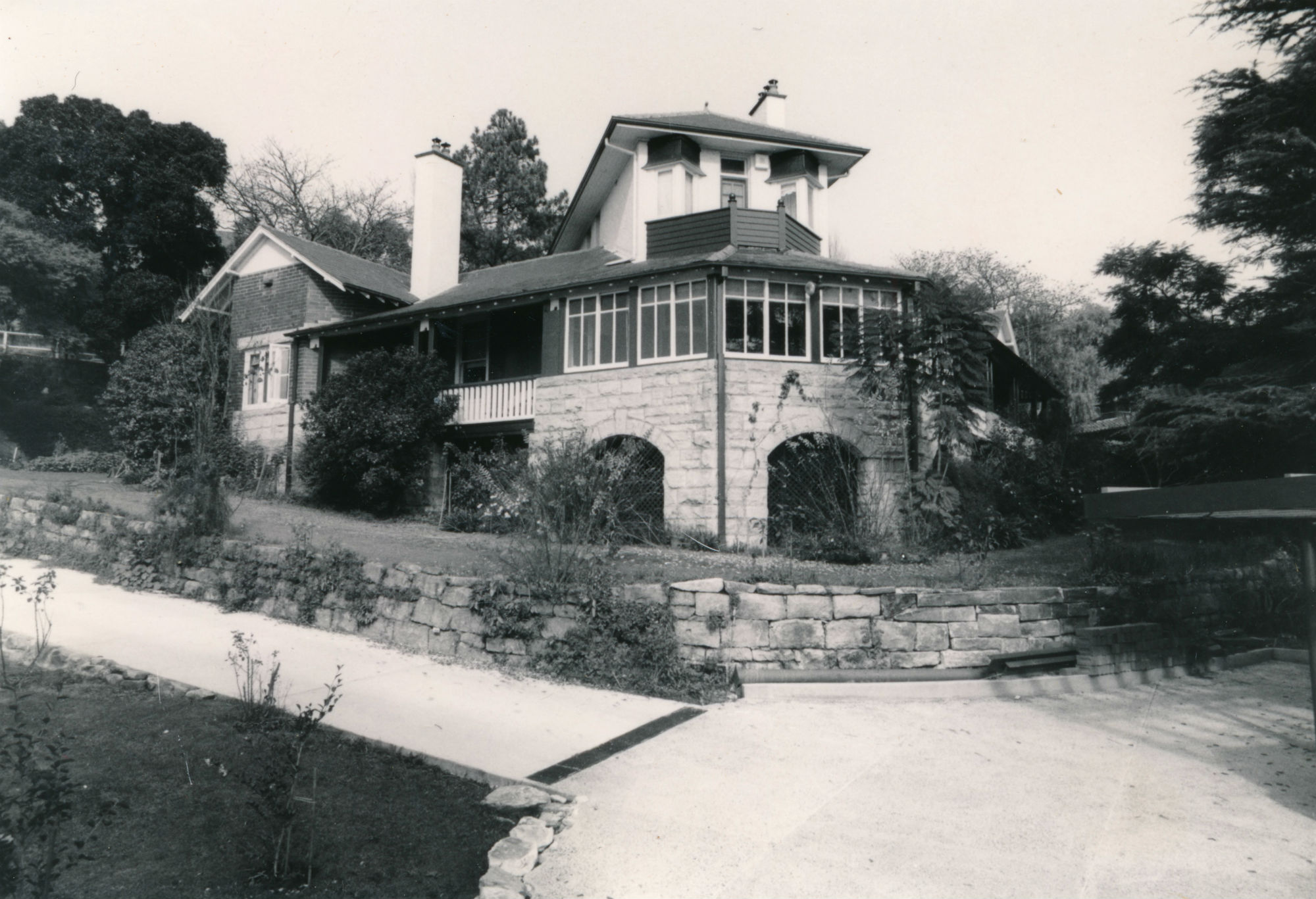