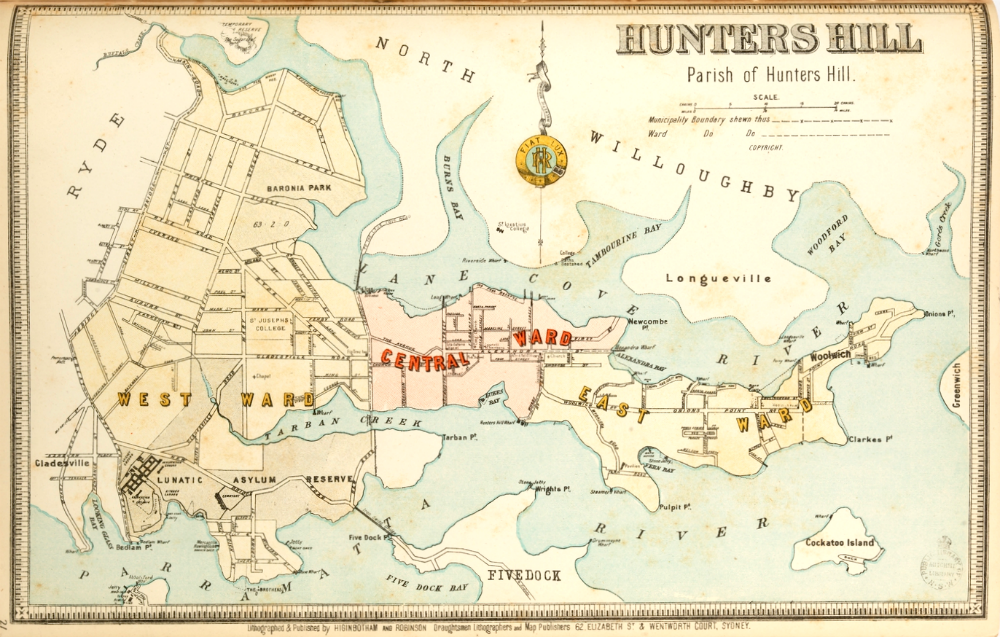 Farmlands were taken up to the west of Hunters Hill during the 1790s, and the farms are said to have supplied the city with fresh produce. In the western end, along Tarban Creek, were the allotments of John Doody, Ann Benson (1795-6), James Everard (1798), Thomas Jones (1798) and William Johnson (1799) 30 acres. Several old houses in Batemans Road and one in Mars Street can still be recognised as early farming cottages.

The area to the east, being rocky and without fresh water streams, received few settlers until the 1830s. Few who purchased land lived on it, much was for investment and perhaps some were ‘dummying’ for speculators as that was not uncommon in early Sydney. John Clarke built several homes near Clarke’s Point, one of which can still be seen. Ambrose Foss, an apothecary, gathered into his ownership the pick of the central part of the peninsula, but only a hut was mentioned as his. During the 1830s Hunters Hill was defined as a Parish. Most of the land on the peninsula was sold by 1839, all by 1844. Early grants were to William Morgan, James Chisholm, Samuel Onions, John Tawell, Isaac Nichols, Mary Reibey and John Rochester. In the early 1830s the advent of steam ferries passing from Sydney to Parramatta (run by Edye Manning who came to live in Hunters Hill) and the punt, allowing road travel to Sydney, must have greatly increased interest in the area; government release of land grants resulted in considerable delays in processing title deeds all around Sydney.

The government had set aside land around Luke’s Bay as Whalers’ Grants to encourage whaling, to be used as places where ships could be careened. Although the whaling industry elsewhere flourished, the Secretary of State wrote to Governor Darling on 9 January 1831, stating that the grants (none of which had been purchased) were to be suspended since it was not the most desirable way of having the land developed and, in future, land would be auctioned (10% deposit and the minimum price was to be five shillings per acre).

‘At an early hour on Monday evening last, two men entered the house of Mrs Reibey at Lane Cove, and carried away a musket and sundry property; shortly after, about nine o’clock, they attempted to pull Mr Walker’s boat from the moorings opposite Cockatoo Island; failing however in their attempt, they obtained Mr William Clarke’s boat, and proceeded across the water on Greenwich, attacked and robbed……’

The Sydney Morning Herald was later to write on February 14, 1851:

‘that locality has for years been notorious as a rendezvous for runaway sailors and persons committing robberies in various parts of the country, depositing their booty with persons keeping wood boats and through some of them conveying their plunder to and from Sydney. It has also been celebrated as a place where the very worst characters find an undisturbed place of abode and where they are, as it were, licensed to carry on their system of plunder throughout the neighbourhood.’