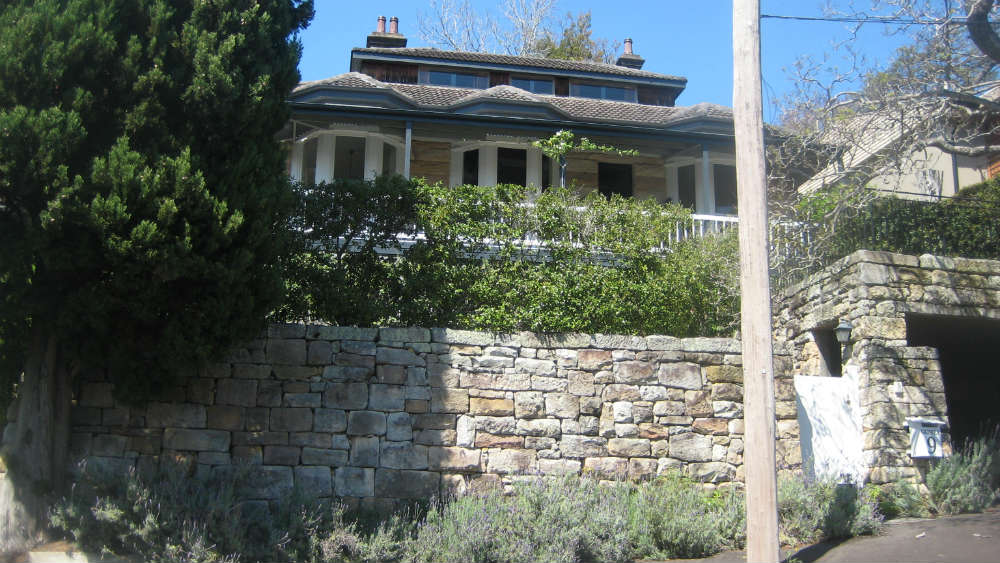 Sitting on part of John Terry Hughes’s original Crown Grant of thirty acres in 1836, this stone house was built by Charles Edward Jeanneret in 1894 and remained in Jeanneret family ownership until 1923. In his history of the family, Alan Jeanneret recorded the names and dates of all Jeanneret’s houses and Gomea is dated 1894 with its address as ‘Garrick’s Wharf’, which was at the bottom of today’s Crescent Street. In the 1893 depression, Jeanneret was hit hard. Perhaps desperate to use as much stone as possible from his quarry in Crescent Street, he built Gomea in the quarry itself against a cliff, below Herne in Futuna Street, which he also built in 1894. The house is constructed of fine rusticated sandstone and has three long bay windows opening onto the verandah, typical of Jeanneret’s later houses. Stone is used for interior walls at the back of the house and for a retaining wall in the garden. The dry-stone wall on the street frontage has been maintained and is part of the historic environment of Crescent Street. The present owners bought the house in 1967 from a  Mrs Wilby and added a top storey. They found a ‘die’, a metal stamp used for impressing a design or figure, on which was engraved ‘Gomea 9 Crescent Street Hunters Hill Sydney Australia [from Boots in England]’.