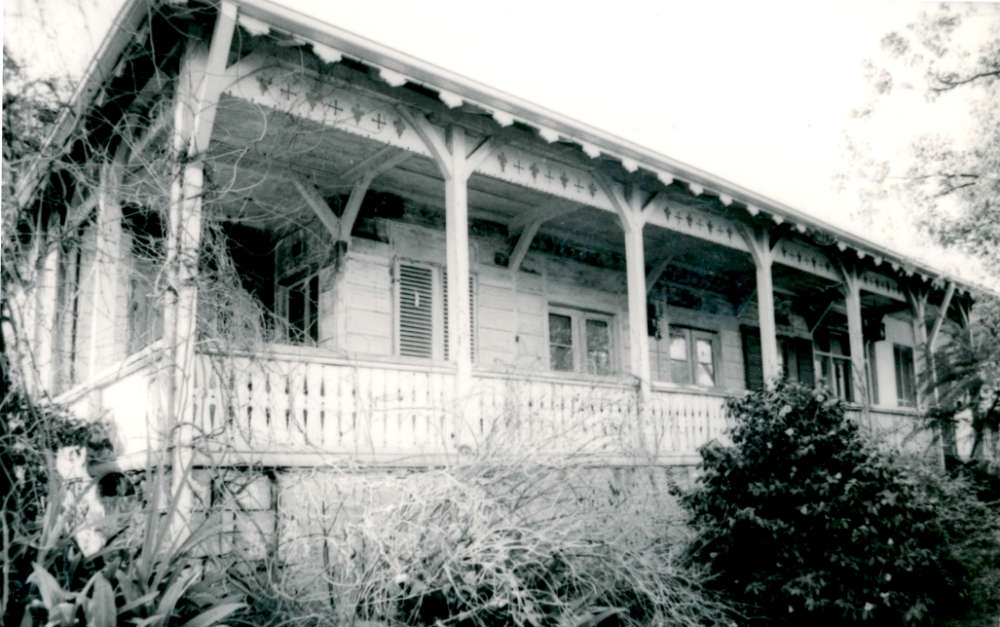 In January 1855, Leonard Etienne Bordier, a young Swiss migrant, bought a four-acre piece of land on both sides of what is now Ferry Street, stretching from the water to approximately Woolwich Road. In 1854 he had signed an agreement with three German workmen (Jacob Arndt was one who settled in Hunters Hill) to bring to Australia four prefabricated timber houses made in Hamburg, supervise their unloading and erect them on this land, two on either side of the then Wharf Road. This was the first planned multiple-housing development in Hunters Hill and each house was built of Baltic pine and had nine rooms, four at the front and four at the back, with very large attics, wide verandahs and detached stone kitchens.

On 5 April 1855, Bordier bought the last wedge-shaped portion of two acres from Ambrose Foss. He had mortgaged the entire estate to Didier Joubert and made many unsuccessful attempts to sell the new properties until finally, in 1856, he was declared insolvent and relinquished them to Joubert for £2000 and returned to Switzerland.

This house was let to T. Cook in 1861 while he was building Bayfield. The house was owned by the Bank of NSW. Then in 1867, William Jack purchased it from John Brush who retained it until 1871 and named it The Bungalow. William Sapsford, later City Architect of Sydney, lived here calling it Helvetia and William Hubert Manning, barrister, was here for many years and changed the name from Yerton to The Chalet. He subdivided the land creating three waterfront lots, cutting the house off from direct access to the river and converted the former driveway of the property into a public road named Yerton Avenue. Two brick rooms were added on the east side and the verandah was extended in the front. The Chalet was identified as an Item of State Significance and is listed on the NSW Heritage Register. Its most famous owner was artist Nora Heysen, the first woman to win the Archibald Prize for portraiture, who lived here from 1954 until her death in 2003.

The other three Bordier houses did not survive and ultimately succumbed to termite infestation or fire:

Adraville was the home of the Bellinghams and then the FitzGeralds and, renamed Croissy, was the property of the French Consul M. Biar d’Aunet and the Williams family who subdivided. The house was demolished in the 1960s.

The Hut was bought by Charles Jeanneret in 1857 and called Somerville; then the Goodridges lived there and the original timber house was added to over the years, until later owners demolished the last of it leaving stone additions such as The Hut (1 Woolwich Road) which, on a subsequent subdivision, had its stone kitchen with thatch roof demolished in 1981.

Riversleigh stood at the present 12 Ferry Street; John Arthur owned it until the Kerrs lived here from 1884-87. Mortgages taken out by Gerald Harnett Halligan after 1887, suggest the building of the present Riversleigh and demolition of the timber house.

A fifth house has sometimes been confused as one of the Bordier pre-Paris Exhibition houses; the gatehouse of Passy, later called Magnolia Maison, which is now in Burwood as the Wellings Gatehouse Museum. Moved in 1967, this is different in architecture, detail and land ownership from the others.